I’m currently reading a book that has been recommended to me called ‘Modern Romance’ by Aziz Ansari- an American actor and comedian- and Eric Klinenberg- who is a sociologist. They designed a huge research project to find out how dating has changed over the years.

The average age nowadays of both men and women getting married is past the 30 mark.

It’s thought that in the 1940s, family connections and the church were common ways to find “the one”

I realised this was true of my Nan and Grandad, so I went to chat to my Nan about it over a steak and ale pie, chips and gravy- like true classy ladies. I wanted to know about her dating life and how she met my Grandad.

They were friends from being kids as they went to the same church. She thinks she was about 11 when she first met him. My Grandad was best friends with my Nan’s brother Eric so they were all in the same group of friends and hung out together. Eric & my Grandad went to Scouts so my Nan went to Guides. Generally, whatever her big brother did, she copied.

Her Mum’s friend was a dance teacher so asked my Nan if she’d like to join her dance group which she did. Turned out my Grandad enjoyed dancing too, so he asked if he could join.

In 1947, he was on leave from the army and there was a dance on in the church hall. My Nan was meant to be in a “gang show” rehearsal, however my Grandad was due to go back to Germany so he asked her if she’d like to go with him. She decided to be naughty and skip the rehearsal to go and dance with him. She was 17 then and told me “little did I know when I went to that dance that I’d sealed my fate”

My Grandad proposed to her not long after this when she was 18. It was Christmas Day 1948. They were engaged for two and a half years before getting married. They had been on a scout and guide camp where a Bishop had told them that they should get married on June 30th because that date was always guaranteed to be good weather so that’s what they decided to do. My Nan went to tell her Mother who said she couldn’t marry until she was 21 however she rebelled as they had made their decision and it was only 3 weeks before her 21st birthday. And indeed… the sun did shine. It was a beautiful day.

They had only been married for 11 months when they had their first child- my Dad. They went on to have three more. Turns out they both loved kids so much that they actually wanted six but hadn’t thought through the cost of them so stopped at four!! Four boys. However they have ended up having nine grandchildren and so far have nine great grandchildren!!

My Grandad was amazing, he loved walking so after he retired, he used to voluntarily take groups of people all over the world on walking holidays. He’d go to places ahead of the groups and recce it. He could read a map unlike many other people could (other than my Dad!)

However sadly he got ill. He got Parkinson’s with Lewy Bodies Demetia and had to go into a specialist home to be looked after. My Nan visited him pretty much everyday but sadly he got worse and worse and lost his battle in December 2011. She tells me she still misses him daily, the thing she misses the most is not being able to dance with him.

But thankfully she has a lot of very very happy memories- I guess you would after 60 years of marriage and the stories she has about them both are wonderful. I am also lucky enough to have a lot of great memories of them together as I spent a lot of time with them as a child.

It made me wonder if life back then wasn’t as simple and phones and online dating existed… what would have happened?! Would they have ended up together? Would they have seen that there was so much choice out there that they’d be silly to marry someone from within their childhood friendship group?

I actually like to think yes they would have been together. They really were a perfect match. Both into camping, walking, holidays- for their 40th wedding anniversary, they went on a round the world trip together! They had a huge part in the Scouts and Guides- my Grandad was awarded a Silver Wolf medal-  which is the highest award made by The Scout Association “for services of the most exceptional character” and my Nan has been awarded a Chief Scout’s award for 50 years service to the movement (although she’s probably now at almost 60 years into it!) They used to be in a marching band together- my Grandad played the big bass drum and my Nan the cymbals. They really did live a great full life.

They were such a special couple together- touched the lives of so many people. True soul mates. My Nan told me there were many ups and downs but that’s normal in relationships- even the best relationships aren’t perfect all of the time, which I believe is very good advice.

I look at their relationship and see it as something to look up to. To aspire to have. Two people truly madly and deeply in love with each other. Literally spending all of their lives together, happily.

In the book ‘Modern Romance’, Helen Fisher who is a biological anthropologist says “The brain is the best algorithm, there’s not a dating service on this planet that can do what the human brain can do in terms of finding the right person” and I agree. Yes, in this modern world, online dating apps can help you meet people, but it’s not the algorithm that pulls people together, it’s love. 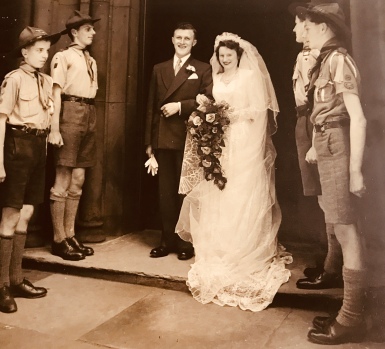 View all posts by itstartedwithaswipe